The Princess by Lisa Renee Jones is not to be missed! 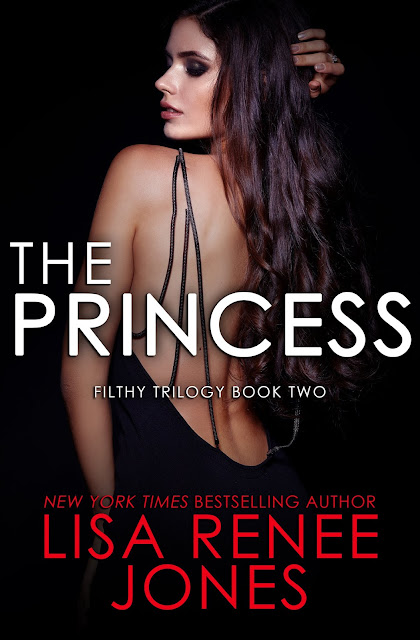 The second book in the Filthy Trilogy - Eric and Harper's story continues...
He's the bastard of the empire, a savant, a genius, and a self-made success. He left it all behind, but he came back for her.
Their passion is a flame that ignites more than their bond. It ignites secrets, lies, and a puzzle that once solved, will shake them to the core.
You know one deep, dark secret, but you do not yet know anywhere near everything.

I forget everything but him. How can I not? He owns me. That was my fear, but I don’t feel fear now. No fear at all. But there are other emotions, a swell of unnamed emotions overwhelming me. We’re in his territory, his home, the danger and darkness of this night, driving confessions and intimacy to a whole new level. “I’m not just going to fuck you, Harper,” Eric promises. “I’m going to make love to you.”
Love.
I spoke that word to him, so hearing it on his lips shouldn’t send shockwaves through me, but somehow it does. It shouldn’t make my chest expand with fear that I didn’t feel moments before, but it does. I both want him to love me and fear the moment he does. With love comes real pain when he tells me to walk away and gives me a shove when he doesn’t really follow, because he decides the bastard and the princess can’t survive.
My walls erect. I need to protect myself. “What happened to fucking the princess and leaving her behind?”
“We just had this conversation. I’m not leaving you again.”
“And yet you told me to leave.”
“I did,” he says. “But I’m a bastard, remember? And not just any bastard. I’m the one who wants you too damn much now to do what’s right. You run. I’ll run faster. I’ll come for you.”
Heat rushes up my neck. “Fucking me is safe,” I whisper. “Fucking me is—”
“Fucking you is perfect,” he says. “And I will fuck you, Harper. Every way I can think of and every day, but right now, I’m going to show you more than the bastard. I’m going to make love to you.” His lips part mine, his tongue stroking deep, stroking long, exploring, and the demand I’d felt in him when he’d snapped is nowhere to be found. There is just this sultry, sexy, caress of his tongue that seduces me and tears down my walls.
I am his to do with as he pleases. I am his to please or otherwise. I think he really will break my heart. I think he knows it, too, but it’s too late to turn back. We’re on a path together that must be traveled, no matter where it leads.

New York Times and USA Today bestselling author Lisa Renee Jones is the author of the highly acclaimed INSIDE OUT series.
In addition to the success of Lisa's INSIDE OUT series, she has published many successful titles. The TALL, DARK AND DEADLY series and THE SECRET LIFE OF AMY BENSEN series, both spent several months on a combination of the New York Times and USA Today bestselling lists. Lisa is also the author of the bestselling WHITE LIES and LILAH LOVE series.
Prior to publishing Lisa owned multi-state staffing agency that was recognized many times by The Austin Business Journal and also praised by the Dallas Women's Magazine. In 1998 Lisa was listed as the #7 growing women owned business in Entrepreneur Magazine.

OMG!  Talk about Eric arriving in the nick of time!

Someone was to kill Harper.  It is a good thing Eric is there to save her.  Yes, he knows he loves her and cannot leave her on her own.  He is her safe haven and hopefully, the only way to survival is to follow and trust him.

Too many secrets.  Too much has been kept under wraps.  Their lives are in danger... and perhaps also those they love are too.  As things become more apparent, new plot twists come up.  Yes, this is a complex plotline.  There a few people they can trust.  Even Harper's mother cannot be fully trusted.

Thanks to Blake Security, our couple and their loved ones are being protected.  As they bond even deeper and share their love, there are secrets between them.  I am not sure this love may survive what is left to be discovered.  I have my ideas... but I will have to wait for the conclusion in the next book ~ The Empire!