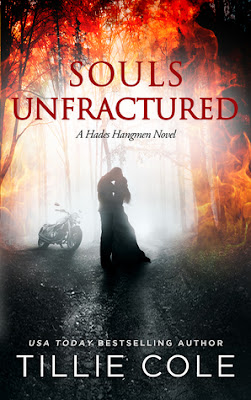 
"For fractured souls are like magnets.
Drawn to collide into an impossible bliss…"

Labeled a ‘Cursed’ woman of Eve from birth, Maddie has endured nothing but pain and repression at the hands of The Order’s most abusive elder, Moses. Now living with her sister in The Hangmen’s secluded compound, finally, Maddie, is free. Free from the suffocating faith she no longer believes in. Free from endless years of physical and mental torment.

At age twenty-one, the timid and shy Maddie is content to live within the confines of her new home—safe from the outside world, safe from harm and, strangely, protected by the Hangmen’s most volatile member; the heavily pierced and tattooed, Flame.

The man who ceaselessly watches over her with his midnight dark and searing eyes. The man who protects her with a breath-taking intensity. And the man who stirs something deep within her numbed heart.

But when circumstances conspire for Flame to need HER help, Maddie bravely risks it all for the broken man who has captivated her fragile soul.

The Hangmen’s most infamous member, Flame, is ruled by one thing—anger. Plagued by haunting demons from his past, an all-consuming rage, and isolated by an abhorrent hatred of being touched, Flame's days are filled with suffocating darkness, pierced only by a single ray of light—Maddie. The shy, beautiful woman he cannot purge from his thoughts. The woman he has an overwhelming need to possess…
... the only person who has ever been able to touch him.

Flame’s mission in life is to protect Maddie, to keep her safe. Until a trigger from his troubled past sends him spiraling into madness, trapping him in the deepest recesses of his disturbed mind.

His Hangmen brothers fear that Flame is beyond saving.

His only hope of salvation: Maddie and her healing light. 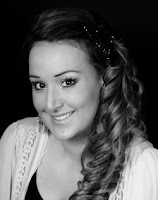 ABOUT THE AUTHOR
Tillie Cole is a Northern girl through and through. She originates from a place called Teesside on that little but awesomely sunny (okay I exaggerate) Isle called Great Britain. She was brought up surrounded by her mother -- a farmer's daughter, her crazy Scottish father, a savagely sarcastic sister and a multitude of rescue animals and horses.

Being a scary blend of Scottish and English, Tillie embraces both cultures; her English heritage through her love of HP sauce and freshly made Yorkshire Puddings, and her Scottish, which is mostly demonstrated by her frighteningly foul-mouthed episodes of pure rage and her much loved dirty jokes.

Having been born and raised as a Teesside Smoggie, Tillie, at age nineteen, moved thirty miles north to the 'Toon', Newcastle-Upon-Tyne, where she attended University and graduated with a Bachelor of Arts honours degree in Religious Studies. She returned two years later to complete a Post-Graduate Certificate in Teaching High School Social Studies. She regards Newcastle to be a home from home and enjoyed the Newcastle Geordie way of life for seven 'proper mint', 'lush' years.

Tillie, from a very young age has been part of the theatre community and loves nothing more than to entertain through the mediums of cheerleading, dance, drama and singing (sometimes in the rain). She can also be found in nightclubs around the world imitating her favourite artists alongside her crazy BFF's - The Teesside Massive - or, sat on the front row at the theatre bopping along to her favourite musical, 'The Rocky Horror Picture Show ', clad in a only a maids outfit, clutching a bag of rice and sporting a vibrant shade of red lipstick.

One summers day, after finishing reading her thousandth book on Kindle, Tillie turned to her husband and declared, "D'you know, I have a great idea for a story. I could write a book." Several months later, repeating the same tired line, she was scolded by her husband to shut up talking about writing a novel and 'just bloody do it!' Immediately she set off on a crazy journey, delving deep into her fertile imagination. Tillie, ever since, has written from the heart. She combines her passion for anything camp and glittery with her love of humour and dark brooding men (most often muscled and tattooed - they're her weakness!).

After years of teaching high school Social Studies and following her Professional Rugby Player husband around Europe, they have settled in Calgary, Alberta where Tillie spends most of her days (and many a late night) lost in a writing euphoria or in her dream of pursuing a dazzling career as a barrel-racing, tasselled-chap, Stetson-wearing cowgirl... Ye-haw!

a Rafflecopter giveaway
Posted by Unknown at 5:00 AM
Labels: Giveaways, Spotlight