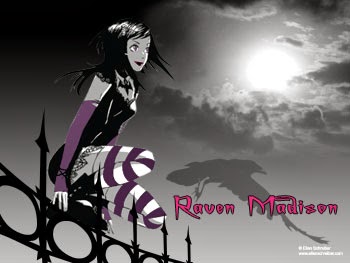 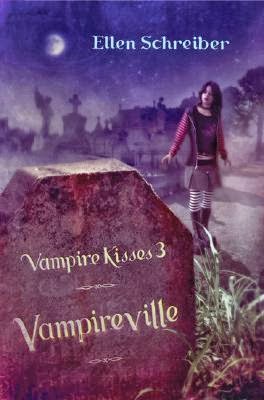 
For goth-girl Raven, dating her dream boyfriend is complicated, especially because Alexander's secret means that they can see each other only at night.

And now the pair must be extra wary in the dark with Alexander's archrival, Jagger, appearing around town. As if Jagger isn't enough cause for worry, Luna, his strikingly pale sister, has also surfaced and seems to have her sights set on Raven's longtime nemesis, Trevor. Together, Raven and Alexander must begin a terrifying search for Jagger and Luna's hideout to drive them away -- that is, if it's not already too late to save Dullsville from becoming Vampireville.

In the latest installment of her popular Vampire Kisses books, Ellen Schreiber continues the startling story of two teen outsiders -- she from the mortal world and he from the Underworld -- who share a thrilling, extraordinary romance.

Wen I read the first chapter I didn't want to go to bed.  It probably took me two days to finish it.  When Jagger's sister Luna and sets her sights on Raven's nemesis things get out of control.  When Luna goes after Trevor, Raven gets mad.  So far my favorite characters in this series are Raven, Alexander and Billy, Raven's brother.
- Skylar, Age 14

About the Author
Ellen Schreiber was an actress and a stand-up comedienne before becoming a writer and moving to her own Dullsville. She is the author of Teenage Mermaid, Comedy Girl, and all of the books in the Vampire Kisses series. Vampire Kisses is an ALA Quick Pick for Reluctant Young Adult Readers, a New York Public Library Book for the Teen Age, and an IRA/CBC Young Adults' Choice.