Giveaway & Review | Mine Until Dawn by E. B. Walters

A man searching for salvation.
A woman who can deliver it.
Will he recognize the priceless gift she gives him?

Vince is like a category five hurricane. He takes no prisoners. Now he is focusing all his energy on one woman.

Sexy and arrogant investigative reporter Vince Knight lives dangerously. In fact, he craves danger and trouble always finds him. When he goes in search of a missing artifact, he finds a priceless gem—a woman he can’t have. Or can he?

Art historian Jade Fitzgerald can tell a fake from a mile away. Fake artifacts, that is. But the smoldering attraction between her and Vince is definitely the real deal. So when he asks her to give him one night, Jade is intrigued. Little does she know Vince is playing for keeps, pulling her deeper into his dangerous world.

A missing artifact brings them together. Something more powerful will make them stay. 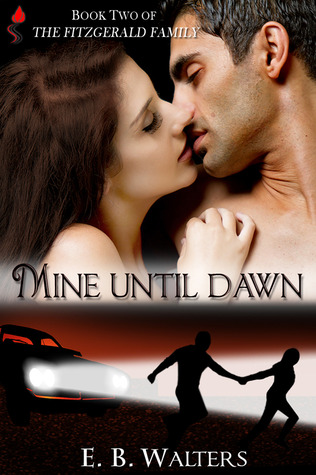 Oh man oh man another great read...  it was after 4am and I couldn't stop reading.... on to the next book... loving the series two books in..  The characters, the connection, their bond.  All of it is just, just amazing!  I loved the suspense, turning the pages just to find out what was to come next.  The love and romance between the two main characters.  See a few of my updates via Goodreads:

ABOUT THE AUTHOR
EDNAH WALTERS grew up reading Nancy Drew and the Hardy Boys and dreaming of one day writing her own stories. She is a stay-at-home mother of five humans and two American short-hair cats (one of which has ADHD) and a husband. When she is not writing, she’s at the gym doing Zumba or doing things with her family, reading, traveling or online chatting with fans.

Ednah is the author of The Guardian Legacy series, a YA fantasy series about children of the fallen angels, who fight demons and protect mankind. AWAKENED, the prequel was released by Pill Hill Press in September 2010 with rave reviews. BETRAYED, book one in the series was released by her new publisher Spencer Hill Press in June 2012 and HUNTED, the third installment, will be released April 2013. She’s working on the next book in the series, FORGOTTEN. Visit her at www.ednahwalters.com

Ednah also writes YA paranormal romance. RUNES is the first book in her new series. IMMORTALS is book 2. She is presently working on book 3, GRIMNIRS (Release date TBA). Read more about this series and the world she's created here www.runestheseries.com

Under the pseudonym E. B. Walters, Ednah writes contemporary romance. SLOW BURN, the first contemporary romance with suspense, was released in April 2011. It is the first book in the Fitzgerald family series. Since then she has published four more books in this series. She's presently working on book six. You can visit her online at or www.ebwalters.com.

a Rafflecopter giveaway
Posted by Unknown at 6:00 AM
Labels: Giveaways, Review, Teaser